This report by KOLO News in Reno is an advertisement for the Montana Solution.

Friends of Animals would likely object to the use of their logo in a story about PZP.

The other two would not.

The advocates protect the public-lands ranchers, not the horses.  Why are you still giving them money?

The views expressed in the article are those of its author and not necessarily those of Western Horse Watchers.

RELATED: On the Necessity of Roundups.

The incident began on January 11.  Gather stats through January 30:

Helicopters did not fly on Day 19.  The trap site was moved to a new location.

Youngsters represented 12.5% of the horses captured, consistent with a herd growth rate of 8% per year, assuming a 5% death rate.  A growth rate of 20% per year is often used by land managers to predict herd sizes.

Body condition scores were not reported.

The location of the trap site within the Complex was not provided.

The number of horses removed to date is 1,409.  Mares returned to the Complex will be treated with fertility control of unspecified type.

The price of hay has climbed 32% in this area since July and equestrians are now paying around $125 per AUM to feed their horses, but the public-lands ranchers will continue to pay $1.35 per AUM, according to today’s news release.

The grazing program insulates the ranchers on the cost side from the realities of a free market, as noted previously.

By moving horses into feedlots and livestock onto the range, taxpayers bear the burden of rising feed prices, not the ranchers.

Refer to document #2021-008799 at the Humboldt County Recorder’s office.  The price, address and closing date match the listing on Redfin.

At this point, a connection with Simplot seems dubious.

If you can’t access the deed online, you can view it here.

The document was released for review and comments two years ago today.  If the project is approved, it will rank among the greatest losses to America’s wild horses.

The Proposed Action, Alternative D in the EIS, will effect these changes:

Resources assigned to the horses may be shifted to wildlife or livestock.  (If wildlife could consume that much forage, the ranchers would be screaming for their removal.)

Grazing allotments in the Rock Springs Field Office are shown in this map.  Table 3-2 in the EIS shows the allotments that overlap the HMAs.

The allotment master report for the RSFO has 80 listings, including 34 allotments in the Improve category, 17 in the Maintain category and 29 in the Custodial category.

The Rock Springs allotment, in the Maintain category, intersects three of the HMAs.

The largest permit holder, from an AUM viewpoint, is the Rock Springs Grazing Association, instigator of the project.  Refer to the executive summary for details.

The terms of the RSGA consent decree and Alternative D in the EIS are not identical.

With 2.6% of the authorized forage assigned to wild horses, the Little Colorado HMA, included in the recent roundup but not in the RMP scope, has, in effect, already been zeroed out.

On the Currituck Outer Banks with Andy’s Awesome Adventures.

The DNA for renewal of business at the Bruneau corrals refers to Simplot Livestock Co.

Better to drop the “R” and make people wonder for a while.

Western Horse Watchers has no credible evidence at this time to show that Simplot and/or a related entity are involved in the project.

RELATED: Hurdles Ahead for JS Livestock?

The BLM has already signed off, but what type of challenges will the company face getting the project approved?

In an area where state and local governments sympathize with the public-lands ranchers, the plans will probably pass through the permitting process like red clover through a bull.

The facility would be located north of Winnemucca, NV and east of Highway 95 in an area known as Paradise Valley.  Click on image to open in new tab.

The transaction occurred in November.  The property includes 1048.43 acres divided among four parcels, two homes, a piped arena, working pens and a shop, according to the listing on Redfin.

The ranch currently has 400 acres in hay production, with 85 acres in alfalfa/grass mix and the balance in straight alfalfa.

Refer to photo 38 in the listing for an aerial view.

The proposed feedlot would reduce hay production slightly, according to Figure 2 in the Final EA, reproduced here for reference.  The living quarters would be situated on the left (west) side of the corrals.

The address given in the listing is 9145 101 Ranch Rd, which matches the information in Dun & Bradstreet for JS Livestock.

Area code 541 covers most of Oregon.

The EA can be found with other supporting documents at the project page on ePlanning.

The facility can accommodate 3,500 wild horses and burros on 80 acres, according to the Determination of NEPA Adequacy for the continuation of funding by the BLM.

The project appeared at ePlanning on December 20.

The company grazes cattle on public lands in Idaho and on allotments overlapping the Paisley Desert HMA in Oregon.

Imagine paying $1.35 to graze one cow/calf pair on public lands for one month, while collecting $5 per day ($150 per month) to care for the wild horse displaced thereby.

With the “S” denoting the involvement of Simplot in that operation, could that be a clue to the owners of the proposed off-range corrals near Winnemucca, NV, referred to in the Decision Record as JS Livestock?

A NEPA project appeared at ePlanning yesterday.  The caption in the documents section suggests it’s in the scoping phase.

No announcements could be found at the BLM news site.

The current population is thought to be 790.

The HMA intersects four grazing allotments according to the Western Watersheds map and appears to be 100% subject to permitted grazing.

The amount of forage assigned to livestock inside the HMA is not known.

There are no opportunities for public comment at this time.

An opinion piece published Thursday by the Reno Gazette Journal, in response to a story appearing the day before, claims that the reporter failed to explain why the BLM continues to aggressively remove wild horses from western rangelands.

The response didn’t either, so lets take a closer look.

Overpopulation, excess animals.  The terms appear in the original statute but were not clarified until 1978, when Appropriate Management Levels were introduced.

AMLs are small relative to the available resources because most of them have been assigned to privately owned livestock.  There is nothing in the current statute that says they must correspond to 20% or less of the authorized forage, but that’s how they’re structured.

Grazing fees.  Public-lands ranchers pay about five cents on the dollar to feed their animals, compared to the going rate.  The grazing program insulates them on the cost side from the realities of a free market.

Ranching income and profitability are inversely related to the number of horses allowed on the range, contrary to the writer’s claim.  By getting rid of the horses, roundups help the ranchers access all of the AUMs on their permits.  The advocates reinforce the effort with their darting programs.

Land ownership.  The public acres in an allotment or HMA or WHT belong to the American people, not the permittee, as implied in the commentary.  Grazing is a privilege, not a right.  In the U.S., the people tell government what to do, not the other way around.

If the ranchers cited in the article couldn’t graze those allotments due to lack of forage, did they leave the profession?  Or did they continue operations on rented pastures or their deeded acres, importing feed as necessary?

If they can do that during droughts and off-seasons, why not do that year around?

The writer did not cite any adverse impacts to drilling and mining in Nevada attributable to wild horses.

She was confirmed by the U.S. Senate in 2012, according to the article in Wikipedia, and serves as the Chief Judge of the United States District Court for the District of Nevada in Reno.  Here she poses with the instigator of the Burns Amendment, now deceased. 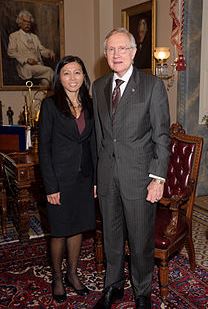 Rulings in 2020 regarding mail-in balloting suggest she leans left politically, which was almost certainly a prerequisite for her nomination.

The incident began on January 11.  Gather stats through January 27:

Helicopters did not fly on Day 15 due to high winds.

Youngsters represented 12.9% of the horses captured, consistent with a herd growth rate of 8% per year, assuming a 5% death rate.  A growth rate of 20% per year is often used by land managers to predict herd sizes.

Body condition scores were not reported.

The location of the trap site within the Complex was not provided.

The number of horses removed to date is 1,178.  Mares returned to the Complex will be treated with fertility control of unspecified type.

District Judge Miranda Du said she wasn’t convinced that they could win their underlying lawsuit, according to a story posted this evening by AP News.

Foals represented 14% percent of the captured animals, consistent with a herd growth rate of 9% per year, assuming a 5% death rate.

The 38 unaccounted-for animals are mares treated with GonaCon Equine.  They will be released in 30 days after a booster, bringing the number of horses removed to 160.

Predictably, in this 26-minute audio segment by KDNK Radio of Carbondale, CO, she laments the lukewarm support in Congress for wild horse eradication by contraception.

Roy is the executive director of the Campaign Against America’s Wild Horses and the ringleader and standard-bearer of the wild horse prevention movement.

She and her army of volunteers want the lopsided resource allocations in HMAs enforced by PZP darting, not by helicopter roundups, with benefits accruing to the public-lands ranchers.

The ‘Path Forward‘ is a plan developed in the private sector to achieve and maintain AMLs, which are small relative to the available resources, as seen recently at the North Lander Complex in Wyoming.

A story by AP News indicates that a ruling is expected by Monday, possibly sooner.

A Justice Department lawyer, representing the BLM, said a delay of even two or three days would prevent the agency from completing the roundup before the end of the year, noting that helicopters cannot be used to drive the herds into the traps from March 1 to June 1 when mares typically are pregnant and give birth.

As of January 24, Day 14 of the roundup, foals represented 13% of the horses captured.

With an average daily take of 70, the capture goal should be reached within two weeks.

Torture?  This news release by TCF is over the top.

If the foal was captured safely with its mom would they drop their opposition to the roundup?