Another hearing will be held on 09/28/18 to rule on an injunction that would stop the roundup completely.  See the report posted today by KTVQ in Billings, MT.

Video posted 08/28/18 by Salt River Wild Horse Management Group.  No description was provided.  Questions left in the comment area have not been answered as of today.

Probably intended to show livestock moving into an area where the horses were being fed (due to the drought), not how horses react to spotlights at night.

Helicopters would be used to gather all wild horses on Beatys Butte HMA, followed by the return of 100 studs and mares to the range, according to a news release issued yesterday by the Lakeview office.  Mares would be treated with a contraceptive (such as PZP).  Public comments must be received by 09/28/18.

The HMA is in southern Oregon on the Nevada border.  It contains 437,120 acres and will have a population density of 0.23 animals per thousand acres at the end of the process, almost nothing.

The announcement did not indicate if the goal was to have the area horse-free within ten years, but it sure sounds like it.  Also omitted from the remarks was the innovative Beatys Butte Wild Horse Training Facility.

A 100% gather was completed in 2015, the result of a new cooperative program between ranchers and the BLM.

The proposed gather marks the next phase of a long-term strategy developed by ranchers, wild horse advocates, environmental groups, elected officials, and state and federal fish and wildlife agencies, according to the announcement.

How many advocates want to see horses removed from western rangelands, families broken up, breeding patterns determined by government?  Who benefits from this arrangement?

The wild horse population on Beatys Butte was over 1000 in 2015.  Today it’s around 250.  The number of livestock in and around the HMA was not provided.

The trailcam photo below shows an underweight horse on the Virginia Range.  A WHB specialist might give it a BCS of 3.  A wild horse critic (ahem, cough-cough, hater) might argue the horses are overpopulated and need to be removed from the range.

Would that be a fair statement?

A ‘common cause’ belongs to the system and affects all horses in an area.  The illness affecting the Waipio Valley horses would be an example.  It will probably be attributed to common causes, something in their environment.  Ditto for the Sand Wash horses, who are threatened by fencing and drought.

A ‘special cause’ is outside the system and affects only individual herd members.  An example would be the horse recently removed from Big Summit WHT.

If you saw many horses with low body condition scores, you’d be thinking common causes, such as excess animals / not enough land / insufficient forage.

In this example you only see one such horse, so you’re looking for a special cause, like illness, injury or loss of teeth.

Calling a horse ‘stupid’ because he wandered onto a road and was hit by a car is an example of Mistake #1.  Any of the horses in his band could have done that, because a new subdivision is chewing up their land and now they must find food elsewhere.

The critic above is wrong.  He has made Mistake #2.

Currently, he’s working with horses recently gathered from Wheeler Pass HMA, near Cold Creek, NV.  See the report posted today by KLAS News or visit his FB page for more information.  He provides the service free of charge after the horse is adopted.

Story begins at 0:25 in the following video by KLAS News.

Bait trapping ended 08/29/18, according to a news release issued today, with 801 horses removed from the Nevada Wild Horse Range, the largest HMA in Nevada.

Thirty one deaths were reported (3.9%) and the number of horses returned to the range was not stated.  Captured animals were taken to the Palomino Valley Center near Reno, NV and the Ridgecrest Regional Corrals in Ridgecrest, CA.

Gather stats and daily reports can be found on this page.

A report posted today at The Daily Sentinel, titled ‘Volunteers understand why horses have to go,’ explains how the so-called advocates at Friends of the Mustangs are working with the BLM to remove 60 of the 190 horses in the Little Bookcliffs Wild Horse Range.

[BLM’s Jim] Dollerschell said he thinks one of the reasons there is less contention in the case of Little Book Cliffs gathers is because of the longtime partnership the BLM has had with the Friends of the Mustangs in managing the herd.”

Maybe those ‘Friends’ are drunk on PZP fumes.

At the Pryor Mountains, advocates took legal action to stop a planned roundup.

At Sand Wash Basin, advocates brought in water to help the horses cope with drought.

But at Little Bookcliffs, advocates help set the traps.

What the hell is wrong with these people?  Couldn’t they figure out a way to keep the horses on the range by bringing in food and water?  Drought is a temporary condition, why are they making permanent changes?

The author of the report, possibly aligned with ranching interests, couldn’t resist taking a shot at the horses:

“The pressure the horses are currently putting on their habitat is made evident as travelers leave it and cross into a livestock grazing area that’s still replete with grass.”

Yeah, we should get rid of the horses and replace them with cattle.  Go pound sand, dude.

Horses generally don’t like things above them, especially predators.  Was this a good lesson or a bad lesson for the horse?  Is horse-to-rider feedback a part of your training regimen?  H/T Mandy Bradford.

As-left condition of corral, good for another day.  Their sandbox is on this side of the shipping container (when you come in the back gate).  Filmed 08/19/18.

A lawsuit was filed in federal court today by Ginger Kathrens and The Cloud Foundation to stop a planned roundup in the Pryor Mountain Wild Horse Range, arguing that it would destroy the genetic viability of a herd descended from horses brought to the New World by Spanish explorers.  Refer to this report in AP News.

Video posted today from USFS on horses gathered from Wheeler Pass HMA in May 2018 (near Cold Creek, NV).

Rick Gore lets the cat out of the bag…again.  WTWT.

The BLM’s Wild Horse and Burro program is at a crossroads, according to an article posted today by the American Veterinary Medical Association.  The author claims that HMAs are overpopulated by 100 percent to 1,500 percent.

To give some perspective, the BLM says ideally 27,000 of these animals can live in balance with livestock and wildlife on public lands.”

This is another example of misuse of figures.  The aimed-at population of 27,000 animals and available land of 26.9 million acres pertain to HMAs only.  The observed population of 81,951 animals corresponds to all lands, including HMAs.  You can’t compare 81,951 to 27,000 and conclude wild horses and burros are overpopulated because they don’t have the same land-basis.

Note that the combined AML of 27,000 animals (horses and burros) and available land of 26.9 million acres yield a population density of one animal per thousand acres, just one twelfth (8.3%) of the density typically allowed for livestock. 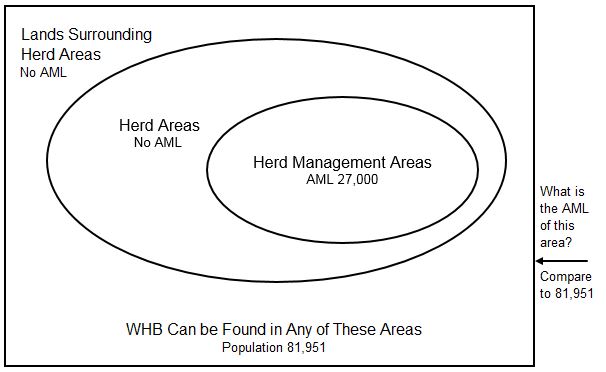 What you see on the range is not private-sector capitalism.  The helicopters, the bait traps, the zeroing-out of HMAs and reductions of AMLs, the video propaganda and bogus news reports, all are the result of a special interest using the media and instrumentalities of government to achieve its agenda.  It needs to be broken up.

BLM will be offering 35 wild horses and burros for direct purchase at the Will Rogers Memorial Center September 7 & 8, according to a news release issued today.  These are in addition to the trained horses to be auctioned at the Extreme Mustang Makeover event at the same venue.

WHB posters will probably be available somewhere on site both days.

The new cash-and-carry rules are a godsend to horse lovers everywhere, as the waiting list has been long and people have been hanging on the fence for months just for a chance to adopt one or two of them. 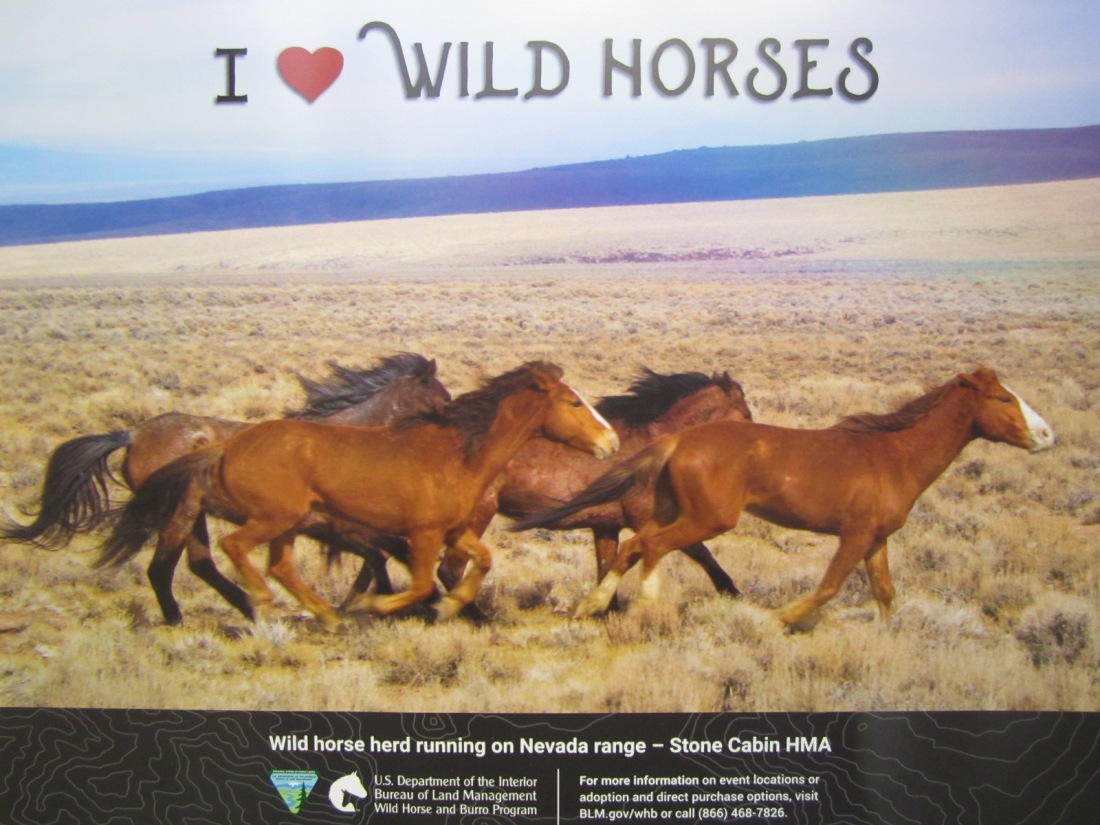 First of a three-part series on chores around the ranch.  Here is the as-found condition of the corral, 24 hours since last cleaning.  Most of the stalls have been removed, leaving an open space in the shelter.  Horses can interact with each other, come and go as they please.  Remaining stalls only used for recovery from injury or illness.  Filmed 08/19/18.

One of Rick Gore’s classic ‘white board’ videos.  Discussion of pastures and corrals begins at 4:10.

Leo Kuntz said they were the ‘Labrador Retrievers of the horse world,’ according to this 13 minute podcast posted today by KFGO in Fargo, ND.  They are no longer found on the range, existing only through preservation efforts of conservancies.

RELATED: Leo Kuntz, Guardian of the Nokota Horses, Passes On.

The state has been ‘ground zero’ for wild horse gathers this year, with the Range Creek, Cedar Mountain, Four Mile, Bible Springs, Tilly Creek, Sulphur and Muddy Creek HMAs targeted for removals.  Next on the list is the Onaqui Mountain HMA.

An article posted today in the Odgen-based Standard-Examiner looks at a proposed roundup that would remove 84% of the horses.  Opposing viewpoints are considered.

“BLM does review range health when they renew grazing permits, but it’s true there are hundreds more cattle and thousands more sheep permitted than there are wild horses on the Onaqui.”

At what point do we start calling it collusion?

Somewhere around the Heber WHT.

Seal of Approval: The bureaucrats and their minions have affirmed the material on these pages. Accept no substitutes.

Welcome to the Love Triangle on America’s public lands. It’s a big club but hopefully you’re not in it.

Still Not Convinced That the Advocates Are Frauds?

Fix, Sell or Close: What to Do About the Advocacy Groups?