The resolution would urge the federal government—ooops, administration—to, among other things, establish management of these animals informed by independent science and the American public, and to restore a thriving ecological balance to California wild horse and burro areas and territories.

Although ‘independent science’ is suspect, the addition of ‘thriving ecological balance’ could be a big red flag.

If it means wild horses and burros living in balance with wildlife, as specified in the original statute, then fine.

If it reflects contemporary usage, where most of the resources on public lands have been diverted to privately owned livestock, then the measure is toast. 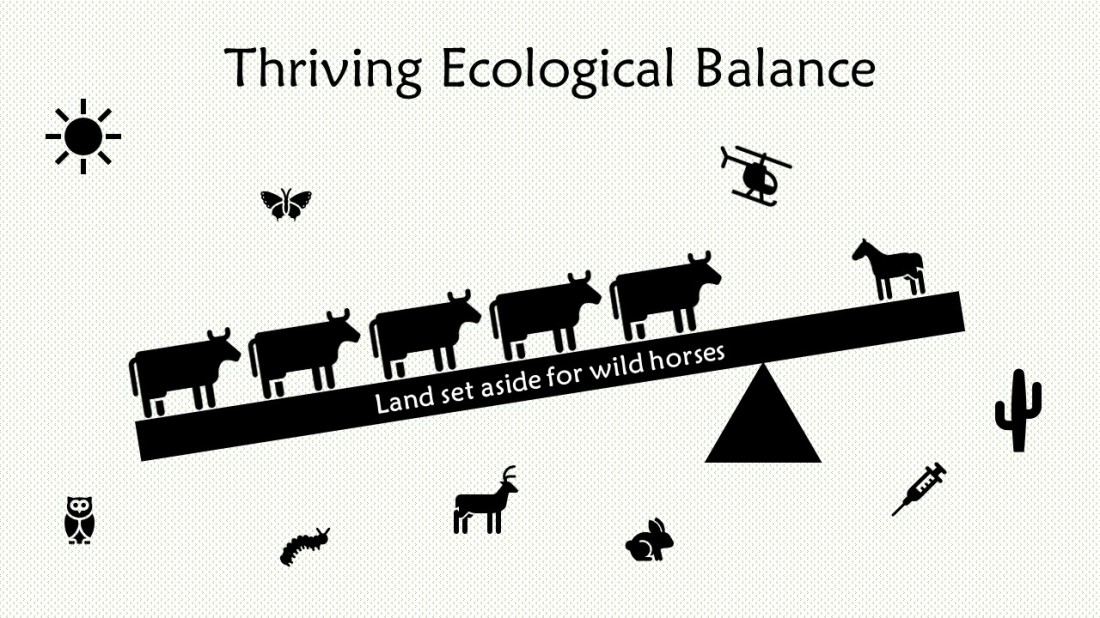 The text was revised on June 28.  The status says re-referred to committee.

No hearings have been scheduled.

Water is a limiting factor in the analysis, according to a story in today’s edition of the Las Vegas Sun.  Although the lake is the main source for the burros, along with a few springs, the BLM can’t consider it when setting management levels.

The AML for horses is zero but a small herd inhabits the area.  They will be removed if the plan is approved.

The comment period for the draft EA closed on April 30.  A decision record for the project has not been published.

The 50,000 wild horses in off-range holding could be returned to the range by ending permitted grazing on just a few dozen HMAs.

That’s about one fifth of the HMAs and WHTs combined.

If the pattern holds in other wild horse areas, the total number of horses cheated out of a spot on their home range by privately owned livestock is well north of 200,000.

As bad as that is, the advocates want to get rid of even more with their ruinous darting programs.  Why are you still giving them money?

RELATED: Example of Downstream Focus, Confusing Cause and Effect.

They wade into the water to eat the stuff, much like the horses on the Salt River, according to a report by The Herald-Sun of Raleigh, NC.

The story said the horses have learned to swim from island to island when food is scarce but what would happen if the next one is a grazing allotment that’s currently in season?

The incident began on March 9, a resource enforcement action that follows a wild burro removal in 2020.  Gather stats through June 27:

Fertility controls will not be applied this year and the incident is not open to public observation.

The number of burros in the unaccounted-for category is 55.

RELATED: Have You Seen Any Videos of the Oatman Burros Lately?

A story in today’s online edition of the Herald and News of Klamath Falls, OR says the operation will resume on private lands but does not say when.

It will not be open to public observation.

Last year, five horses were captured in September but no further activity was reported.

Western Horse Watchers was unable to find an announcement for the event at the BLM news site.

Both groups want the same thing: Wild horses off the range.

The advocates want to get rid of them with contraceptives, while the ranchers want them dispatched with helicopters, but those differences can be worked out later.

Collaboration could lead to a groundbreaking plan for eradicating most of America’s wild horses.

WARNING: Although this video begins with an F-bomb, some viewers might be offended by the foal at 0:40.

The video description says all of the beautiful young horses and pregnant mares in this film have been slaughtered by now.

Slaughter, like adoption events, sanctuaries, EMM and TIP, doesn’t get much attention on Western Horse Watchers because it does not address the causes of their removal from public lands.  It’s too far downstream in the process to bring any improvement.

What good is it to shut the valve on the outlet of the tank when you haven’t stopped the flow going into the tank?

RELATED: Not the Same SAFE Act?

The incident was not announced on BLM’s news site.

Wild horse enthusiasts will get a chuckle out of this propaganda piece dated June 25 by the rancher-friendly Capital Press of Salem, OR.

As for the trainer featured in the story, you probably don’t want a horse handled by her.

Like adoption events, EMM and TIP are rarely discussed on Western Horse Watchers because they are too far downstream in the management process and deflect attention away from the ranchers and the underlying causes of wild horse removals.

An article posted yesterday by Bloomberg Law says the BLM decided against the tactic, part of a broader effort to enforce resource allocations in the HMA, in response to legal actions by several advocacy groups.

A subscription is required to read the full story.

Would you publish an op-ed about millions of domestic livestock that ruin public lands with high-density grazing and title it ‘Too Many Wild Horses?’

An article about overpopulation by The Horse suggests that the current surplus of about 70,000 wild horses and burros (on public lands) could be eliminated if just four to five percent of horse-owning households adopted one animal.

The story did not indicate how many more households would be needed to liquidate the animals in off-range holding.

What’s wrong with this idea?

First, there are few if any excess animals on America’s public lands.  That’s bad news to those in the PZP supply chain.  They thrive on the overpopulation narrative.

Second, adoptions don’t stop removals, they prolong them.  The AIP, and the adverse consequences associated therewith, are effects of roundups, not causes of them.

Third, the ‘surplus’ would return, the roundups would resume and the corrals would be overflowing, not because the animals reproduce, but because of the way our public lands are managed.

AMLs, the numbers that determine when an area is overpopulated, are small because the bureaucrats have decided that most of the resources on lands set aside for horses and burros shall be assigned to privately owned cattle and sheep.

The animals in off-range holding could be returned to the range by ending public-lands ranching on just a few dozen HMAs.

Those corrals and pastures could be emptied four to five times over if livestock grazing was ended on all HMAs.  It’s that bad.

Eventually the herds will exceed the True AMLs and corrective actions will be needed.

But those discussions are off the table until the HMAs are managed principally for wild horses and burros, which is what the True AMLs represent.

If you want to help America’s wild horses and burros, look upstream in the management process, understand why they’re being removed from the range and address those causes for a lasting solution.

The June 24 fact sheet at Inciweb shows little if any spread in the past few days, with 5,400 acres burned and 25% containment.

Firefighters continue to monitor for any threat to the Pryor Mountain WHR.

Here’s what the advocates are proposing:

Not exactly what Velma had in mind 50 years ago.

The closure, which started yesterday, means the public is prohibited from entering any part of the forests at any time, according to a USFS news release dated June 22.

An expiration date was not provided.

The area is home to the Heber wild horses.

The advocates can tell you how much adjuvant to add to the PZP but they couldn’t convert an AML to AUMs if their lives depended on it, much less compute a forage allocation for livestock in an area set aside for wild horses. Don’t give them a penny!

Welcome to the Love Triangle on America’s public lands. It’s a big club but hopefully you’re not in it.

Still Not Convinced That the Advocates Are Frauds?

Fix, Sell or Close: What to Do About the Advocacy Groups?