The wild horse population was approximately ten times AML at the beginning of the roundup, which affected ‘other mandated uses’ of the land.

See also this story posted today by The Ely Times.

When the gather is complete, the horses will be at 2X AML, consuming maybe twenty percent of the AUMs on the HMA.  Livestock will receive the rest.  If people understood this, the overpopulation narrative would fall to the ground, taking the fertility control programs with it.

The following chart shows the population target (AML) for HMAs in Wyoming as a function of HMA size.  Accordingly,

If the correlation coefficient was 1, all of the data would fall on a straight line, indicating that population was proportional to acreage.  HMAs of 200,000 acres would have twice as many horses as HMAs of 100,000 acres.

Trailcam photos of Virginia Range mustangs at the stock tanks earlier this month. 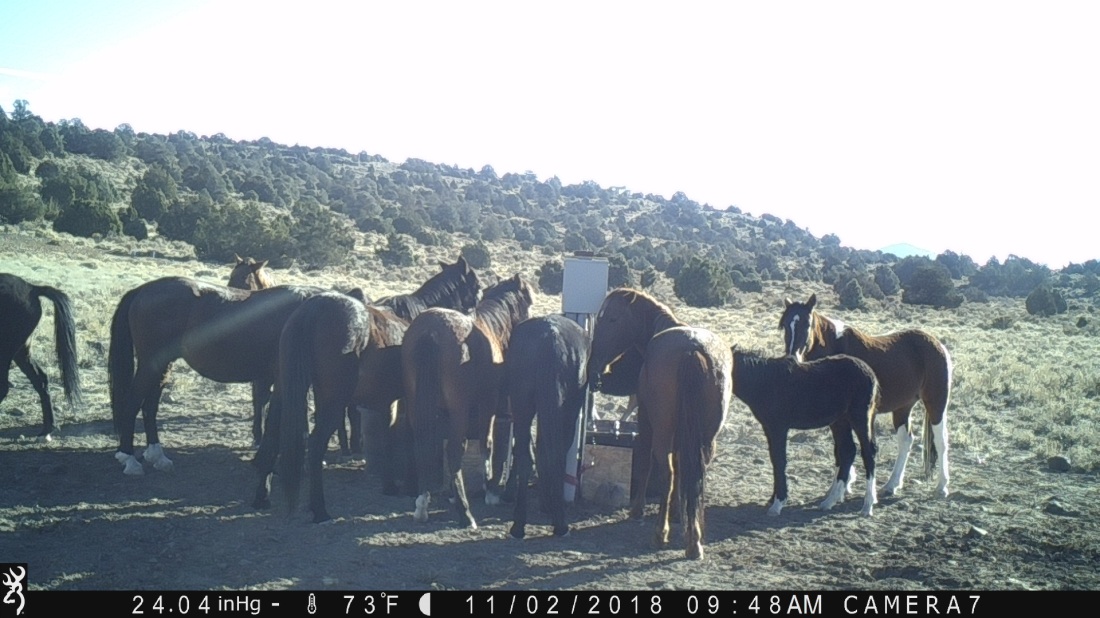 Most of the Herd Areas and Herd Management Areas are in the southwestern part of the state.  Refer to the map on page 2 of this document.

Acreage and AMLs for HAs are not available, as they are not managed for WHB.

Wild burros were not reported at any of the Wyoming HMAs.

Four HMAs have population targets (AMLs) below 150, the minimum number of animals for genetically viable herds.

The target density of one horse or burro per thousand acres has little to do with the carrying capacity of the land.  Rather, it represents the forage loss that is considered acceptable by the public-lands ranchers and their allies at the BLM.

Virginia Range mustangs take on water a few hours before daybreak on 11/02/18.

The Nevada Department of Agriculture has authorized two advocacy groups to feed horses that have come down from the hills, to draw them away from populated areas, according to a report posted yesterday by KRNV-4 TV in Reno.  The animals migrate to lower elevations in the winter, searching for food and water.

The report did not name the advocacy groups.

Feeding wild horses is generally not recommended and the practice is illegal in Nevada.

UPDATE: The advocacy groups may be the Virginia Range Sanctuary and Wild Horse Connection, based on remarks in this article by The Nevada Independent.

The New Mexico Department of Transportation has installed fixed warning signs and radar speed signs along Hwy 48 near the town of Alto.  The signs were put in place until Lincoln County commissioners decide if flashing beacons would be appropriate for the area.  Refer to this report, posted today by Ruidoso News.

The Alto horses were recently returned to the range after two years in captivity when a district court judge ruled they were wild, not livestock.

If the management plan is enforced, wild horses will receive 18% of the forage, with the balance going to livestock, according to data in a legal complaint filed in October.  Keep in mind that these are aimed-at values and do not reflect current conditions.

The complaint, which has 25 pages, reveals the mindset of the public-lands ranchers and should be read by anyone interested in wild horse preservation.

Carbon dioxide and water vapor rise from Mount Poop on 11/25/18.  Water vapor has a much larger greenhouse effect than carbon dioxide, but you never hear about it. 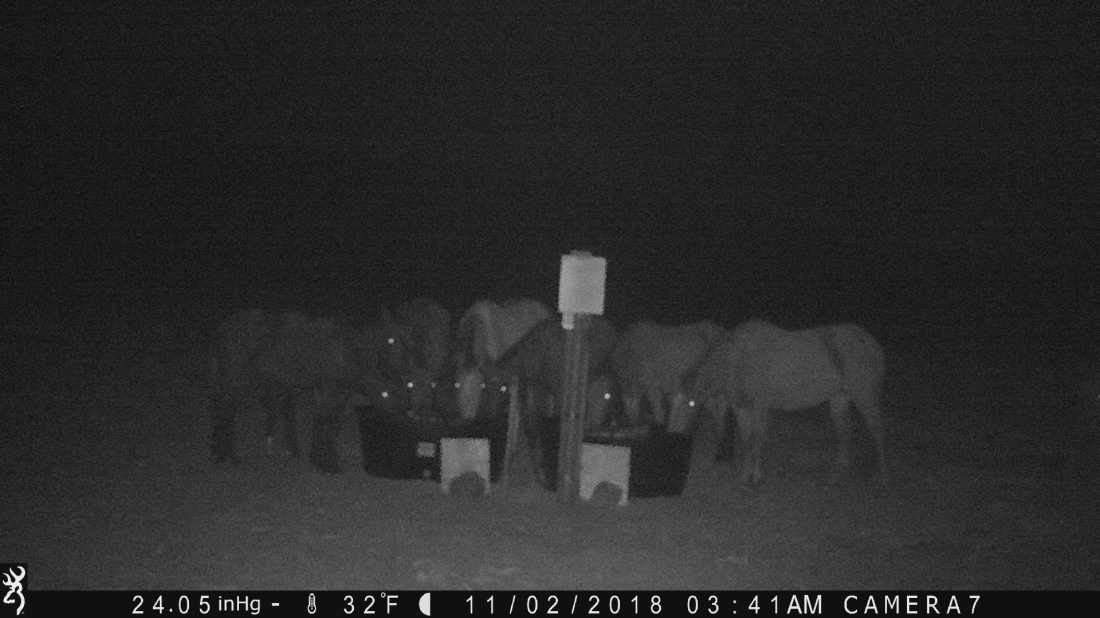 Sadly, many of these horses will be rounded up in the next month or two.  The Pine Nut HMA and HA—lands set aside for wild horses—are subject to several grazing allotments, which means the horses have to go.

Refer to this story, posted yesterday by the Las Vegas Review-Journal.  Although it acknowledges the presence of livestock on the HMA, it does not question their number and their demand for resources relative to the horses.

“The reduction is needed to maintain wildlife and livestock habitat and reduce wildlife degradation of public lands, according to a BLM advisory.”

The overpopulation narrative prevails: The horses have to go, on lands that belong to them!  Many of the so-called advocates, including the PZP zealots, take this position.

Nobody bothers to look at the data.  If they did, they’d realize that the lion’s share of the forage goes to privately owned cattle and sheep.

This has to stop.  The WHB Act has been inverted.  Nullification is next.  The BLM and USFS need to come clean with the numbers.  Put them out there for all to see.  Let the people decide which species should be removed from western rangelands.

RELATED: Silver King Roundup In the News, Public-Lands Ranching: How Bad Is It?, Stop the Roundups, Fertility Control is Better!

Basically, because it has a wet season and a dry season, not because of climate change.

The wet season, which begins in October, is marked by storms coming in from the west and northwest.  The hills slowly become a velvety green.

Most of the vegetation dies off in the dry season, which begins in May.  The hills become golden brown, dotted in some areas by Oaks, Redwoods and Pines.

Next, consider the fire triangle.  A fire needs fuel, oxygen and an ignition source.

Oxygen is always available, unless you’re living on Mars.  As for the fuel, see the remarks above about the dry season.  Here is Mt. Poop on 05/26/18, barely visible, surrounded by wild oat in its final days, five to six feet tall (for a recent view of the same area, see this video). 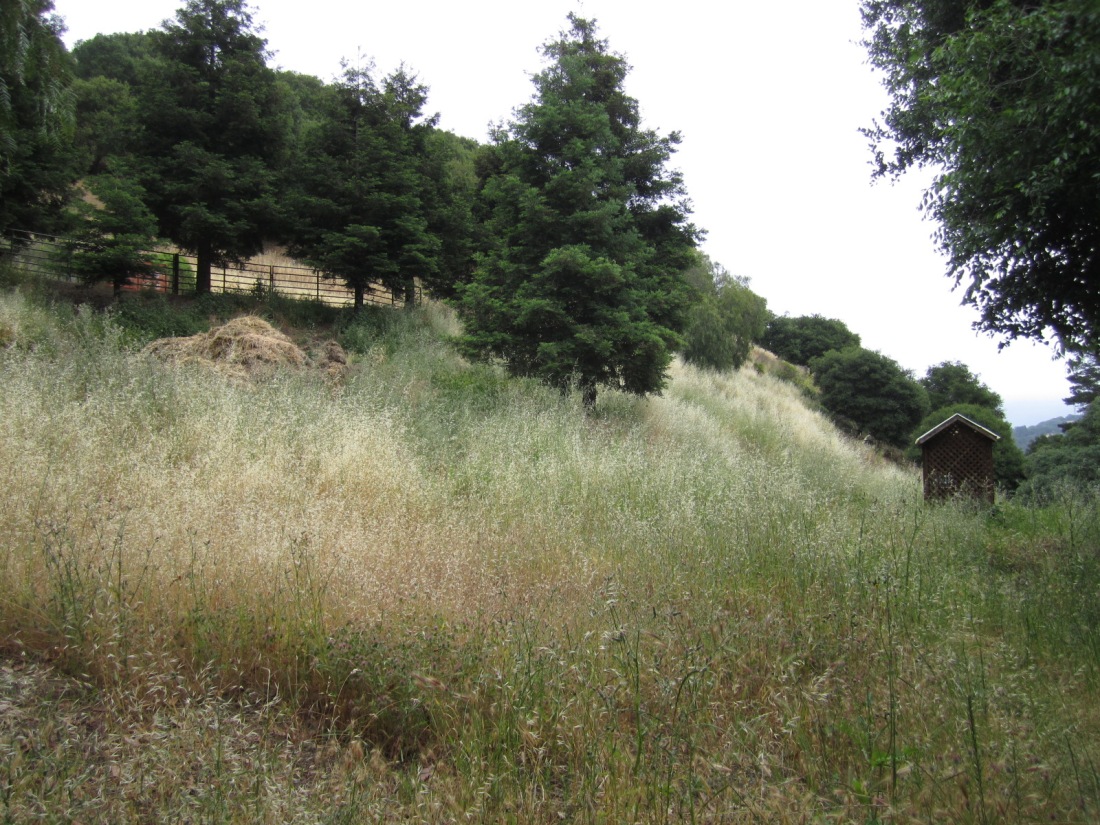 The wet season ending in 2017 brought twice the normal amount of rain.  There was a population explosion of everything.  Small animals running all over the ranch that had never been seen before (or since).  The ground was pockmarked with their holes.

Vegetation died off, leaving many seeds.

The wet season ending in 2018 accrued much less precipitation than the previous year until March, which saw rain almost every day.

Ignition sources include, but are not limited to, lightning, camp fires, power lines, cigarettes, off-road vehicles and trailers with safety chains dragging on the road.

Prompted by fires in 2017, Pacific Gas and Electric Company came up will a brilliant idea: shut off power to those at risk.  Rural customers, on private water systems, would lose their ability to fight fires unless they had backup generators.   (This was not done ahead of the Camp Fire.)

Having spent the summer and fall knocking down dead grass, I can tell you it was very thick and heavy this year.  The effort stalled on 11/22/18, after receiving the first appreciable rainfall of the new wet season.  Photo taken 11/24/18.

The 2019 wildfire season is now getting started, whether you’re ready for it or not.

Composting has resumed on Mount Poop, thanks to recent rains.  Uneaten hay is especially potent.  Filmed 11/24/18.

A friendly reminder from The Ely Times: Helicopters will be pushing ‘excess’ horses off the Silver King HMA starting next week, because the land can’t support them along with other wildlife.  That the HMA is subject to several grazing allotments seems to have been overlooked by the writer(s). 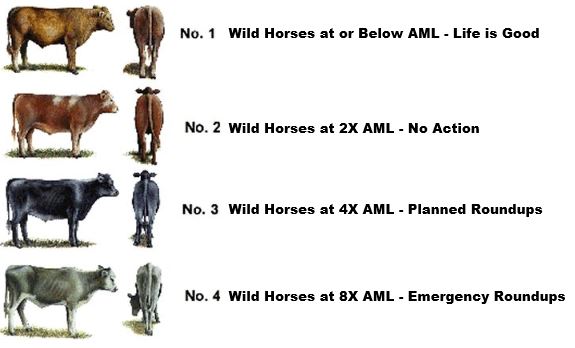 If the management plan is successful, roughly ten percent of the available forage will be allocated to horses, with the balance going to cattle and sheep.

If you have an earthquake, it’s climate change.  If you’re Danny Glover.

Although wild horse advocates asked for radar speed signs, county commissioners suggested an alternative that has been working outside of Las Cruces, NM, according to a detailed report published today by Ruidoso News.  The beacons would be installed along Hwy 48 near the town of Alto, NM.

Twenty former wild horses were adopted last weekend, with twenty four sold, according to a report posted 11/22/18 by the Herald and News of Klamath Falls, OR.

UPDATE: Refer to this legal complaint, filed in October on behalf of the Devil’s Garden ranchers against the U. S. Forest Service, for reducing the AUMs available to livestock.

The Forest Service had issued permits for 26,880 AUMs per year on the WHT, which means at least 4,480 cow/calf pairs were allowed, assuming they graze six months per year or less.  The allowable number of horses on the WHT is 402.  These are aimed-at numbers.  The horses would consume 4,824 AUMs annually.

The carrying capacity of the WHT is unknown.

The pre-gather wild horse population was 3,900.  The livestock population at the time of the gather is also unknown.

“Currently, wild horses on the Modoc NF [National Forest] are consuming more forage than is allocated in the wild horse territory for livestock, wildlife, and wild horses combined.”

They seem to forget that these lands were to be managed ‘principally but not necessarily exclusively’ for wild horses.

If the Forest Service is forced to achieve the targets, there will be roughly ten cow/calf pairs on the range for every wild horse, a ‘thriving ecological balance’ indeed.

On this day we count our blessings…which may include too much food and drink. 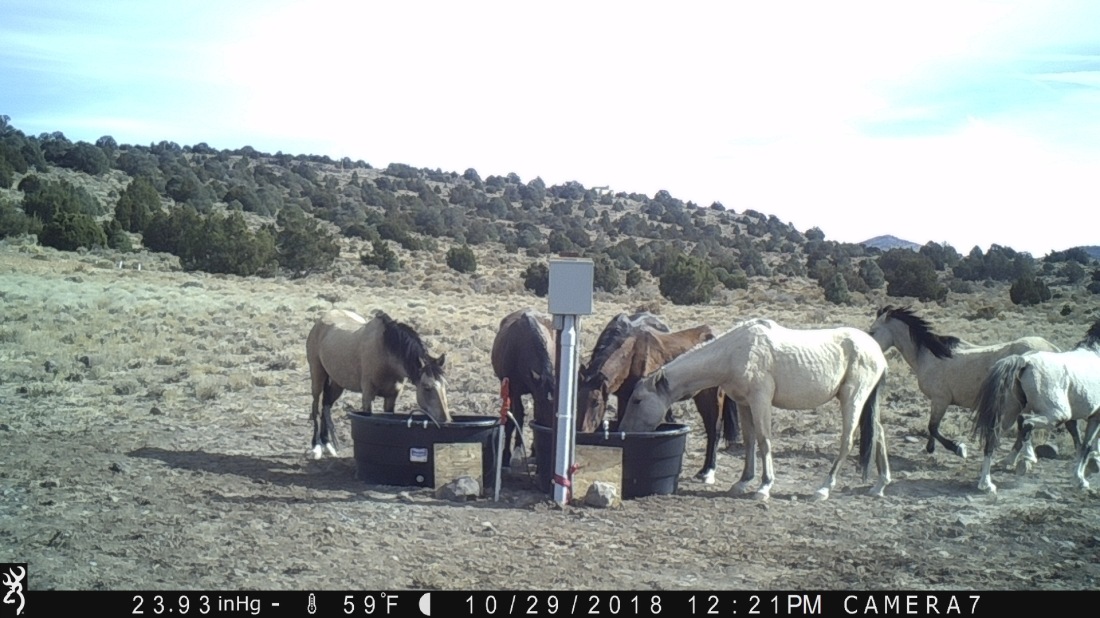 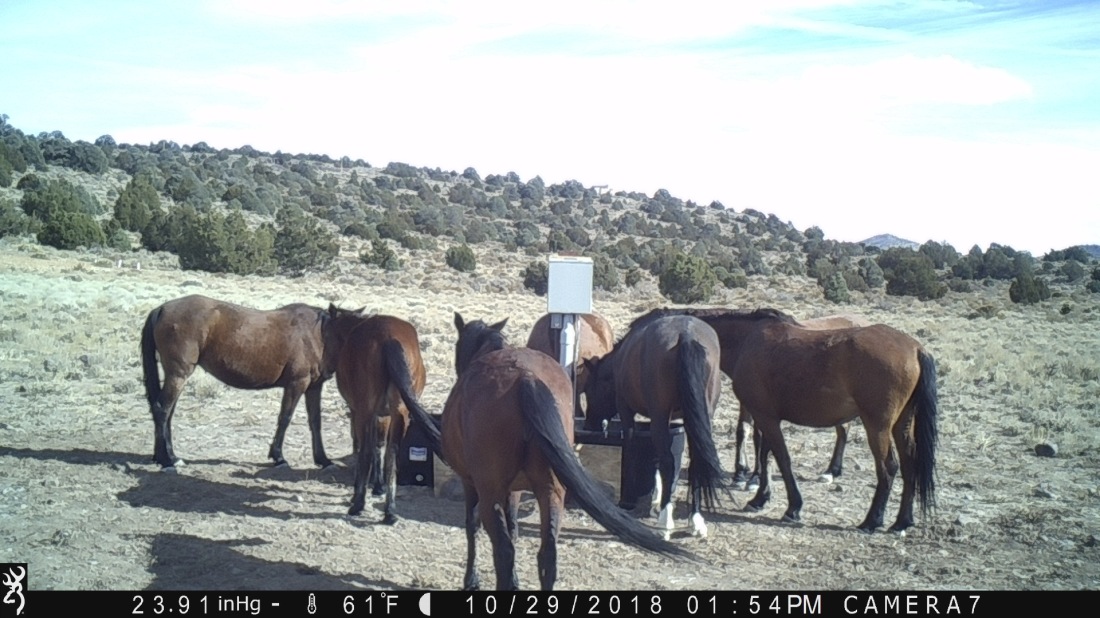