Refer to BLM Instruction Memorandum 2015-070 for care of animals managed by the WHB Program, including deworming, vaccination, evaluation of condition and determination of an appropriate end-of-life action.

Refer also to the daily reports from the Triple B gather earlier this year.  Note that some of the horses, although they survived the chase, were put down due to blindness.  Keep in mind they were strong enough to travel across the range, perhaps for several days, to the trap site.

In the first three cases, none of the horses were emaciated, according to their body condition scores (BCS).  The body condition of the fourth horse was not given.  The fifth horse had a score of 2, which put her in the emaciated category, subject to euthanization according to section A of Attachment 2, Animal Evaluation and Response.  But the reason for ending her life was blindness. 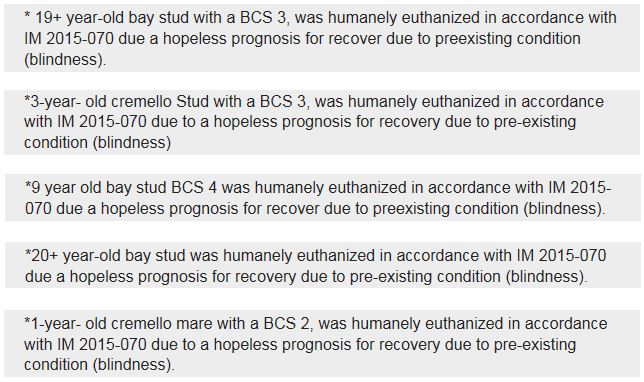 When did the nineteen year old stud go blind?  Yesterday?  Or was he like that since birth?  The case of the cremello mare suggests that blindness can occur early in life.  If it is a hopeless prognosis, how did the twenty year old stud stay alive for so long in such harsh conditions?

The term ‘blindness’ does not appear anywhere in Attachment 2.  That it provides justification for euthanasia must be the interpretation of the specialist on the case.

Maybe the prognosis is hopeless because nobody wants to adopt blind horses and most rescues are not interested in them?  If so, then why not let them stay on the range with their seeing-eye helpers?  How can you refer to these life-ending actions as ‘humane?’

One thought on “Blindness: Death Sentence for BLM Horses?”