This video tells the story of the Sheldon horses in NW Nevada, former inhabitants of Sheldon National Wildlife Refuge.  Rounded up a few years ago.  The area is managed by the FWS, not the BLM, although a BLM contractor was involved in the gathers.

The size of the refuge is 574,000 acres, and at the time of the removals there were 800 horses and 90 burros roaming the land, for a stocking rate of 1.6 animals per thousand acres, almost twice the rate of your average HMA in Nevada.

The gathers themselves, sometimes difficult to watch, are an effect, not a cause.  Instead of criticizing the contractor, question the basis on which they were justified.  Does everything appear to be legit? 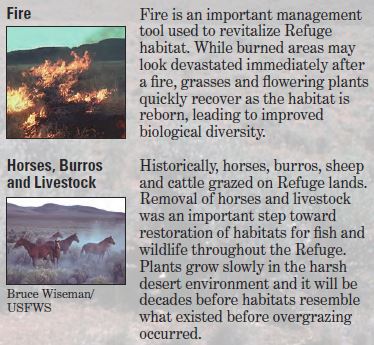 For example, this section of the SNWR brochure indicates that plants grow back quickly after a fire but grow slowly after grazing.  Does that sound right?  What happens to the risk of fire when you allow vegetation to grow unchecked?